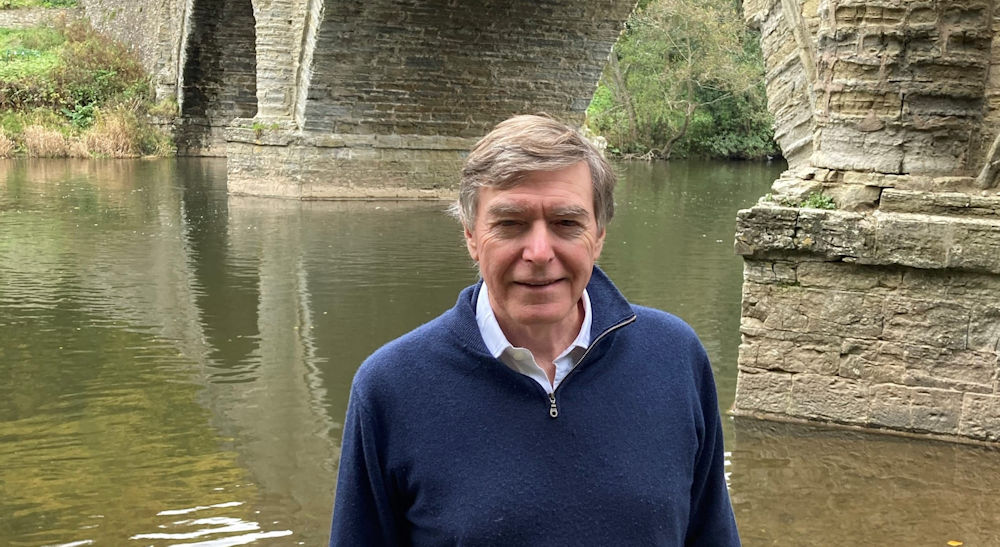 Philip Dunne MP by the River Teme in Ludlow

I introduced the Sewage (Inland Waters) Bill as a Private Members Bill to try and resolve the shocking extent of sewage polluting our waterways.

Unfortunately, due to the pandemic wreaking havoc with everything since then, including the parliamentary timetable, my Bill has ran out of time. After so much work, and such brilliant support from the public, MPs, and many organisations, this has been hugely disappointing - especially since I had secured support for the principles of my Bill from both Government and Opposition front benches, as well as many colleagues from across the House of Commons.

The Bill was supported by:

But all this momentum has not been wasted. I have worked in recent weeks with Ministers and officials at the Department for Environment, Food & Rural Affairs to take forward the key objectives of my Bill in other ways.

I was delighted that on 29th March 2021 the government confirmed that it will legislate to bring in three measures at the heart of my Bill: placing a duty on government to publish a plan by September 2022 to reduce sewage discharges from storm overflows; a duty to report regularly to Parliament on progress on implementing the plan; and a duty on water companies to publish data annually on storm overflow operation.

Why this will make a difference

This is important, as sewage pollution is exacerbated by increasing volumes of rainwater. Fixing the problems with storm overflows is going to take years, as water infrastructure has not kept pace with population growth.

But getting on top of it starts with understanding the scale of the problem at water treatment facilities. During wet weather, storm overflows are intended to prevent sewers becoming overloaded with a combination of sewage and rain, but their release mechanism is to discharge sewage into our rivers, intended originally to have been for exceptional weather events, now tragically all too routine across many of our waterways.

The measures announced by government build on work by the Storm Overflows Taskforce, set up in September 2020, in response to my campaign. This brings together government, the water industry, regulators and environmental NGOs to accelerate progress. Through the Taskforce, water companies have committed to increase the number of overflows they will improve over the next five years.

What are the next steps

The Environmental Audit Committee, which I Chair, is also holding an inquiry into measures to improve the water quality of our rivers, which provides another opportunity to make recommendations to encourage the next steps in the Government’s work to improve water quality.

There is so much more we can do. But I believe this commitment by the Government is an important first step forward, meaning all the hard work with campaigners and colleagues in Parliament has started to make a difference. I shall work in the next session to find the quickest route to turn this into law.

Summary of the Bill

The Sewage (Inland Waters) Bill places a duty on water companies to ensure that untreated sewage is not discharged into rivers and other inland waters. The Bill will require water companies to set out plans progressively to reduce their reliance on combined sewer overflows (CSOs). It proposes increasing levels of transparency, as firms will be mandated to report publicly not just on the frequency and extent of sewage discharges from CSOs and any other sewer catchment assets, but also on the impact on water quality as this is enabled by advances in technology.

The Bill also proposes measures to upgrade drainage infrastructure to separate household sewage from surface water drainage, helping reduce the risk of overspills. It includes measures to reduce harmful products such as non-biodegradable wet wipes, commercial fats and oils from being disposed down the drains. It also proposes measures to expand the number of inland bathing waters and establish targets to increase those classified as “good” or “excellent”. 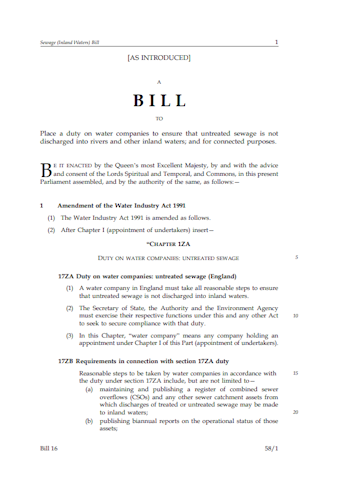 Document
sewage_inland_waters_bill_explanatory_notes_14oct20.pdf426.35 KB
In the Media